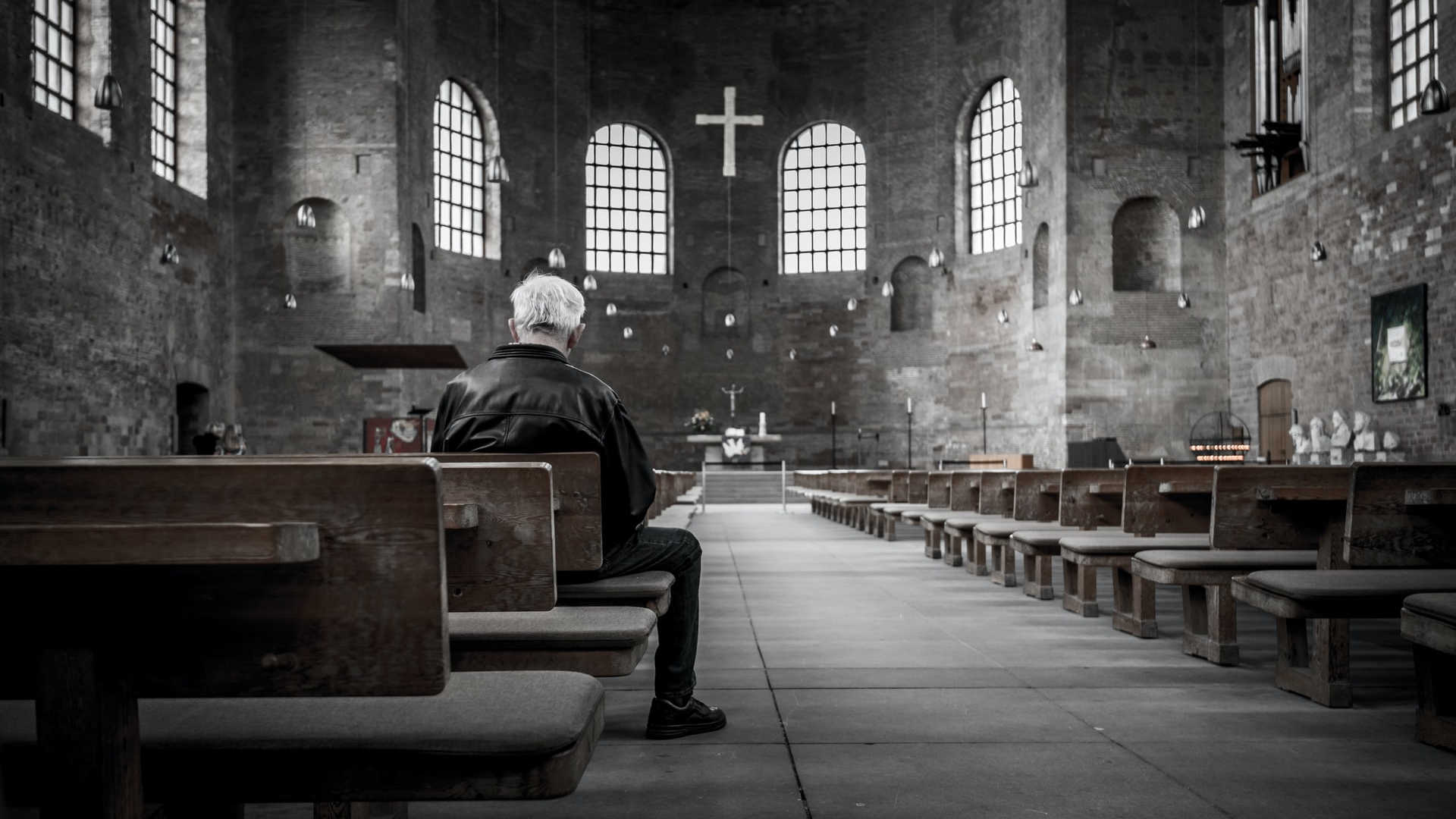 This piece has been republished from an original article on Eric Conn’s website.

Yes, the virus has raged on for months, the shutdown has been around for over a month in most places, government encroachment continues, and Big Eva has been…shockingly quiet.

When they aren’t silent, all that’s served up is inane oblivion. A good example is the Ethics & Religious Liberties Commission (ERLC), which is the lobbying arm of the Southern Baptist Convention (SBC).

While millions of Americans face unemployment and the overreach of tyrannical government action that is currently prohibiting assembled worship in many states, the ERLC’s president, Russell Moore, has taken to Twitter to talk about everything from his reading methods, preference for sandals, the life-threatening Diet Coke habit he kicked (what a hero), and the genius of Stephen King novels:

this guy is straight up mocking the SBC with this garbage. How long will you pay for this? https://t.co/p7rreiUfy0

It’s not really different than Hollywood celebs like Arnold Schwarzenegger calling on Americans to stay home from the cramped confines of his back-mansion jacuzzi, or riding down the streets of L.A. with a t-shirt that reads: “Don’t be an ass. Stay inside.”

But it’s OK, we’re told—we’re all in this together.

What’s really astonishing, however, is the wonton neglect from Moore and the ERLC: While churches are under attack, Moore offers the kind of pointless drivel only an upper-class urban elite NPR devotee from Manhattan would care about.

But it’s not just tone-deaf—it’s outright mockery of working class America as it wallows in unemployed misery. But who is Russ mocking, and why?

First, another question: Why do so many evangelical elites, from Moore to Tim Keller and Matt Chandler, punch so hard right—evangelicals who voted for Trump lost their souls, remember—and pander to the left—Keller and Moore are both fans of the op-ed in the New York Times and other left-leaning outlets like The Gospel Coalition (TGC)?

Searching for prominence among left-leaning elites

In her book, The Feminization of American Culture, Ann Douglas details how many ministers in the early to mid-1800s took advantage of the advent of mass media that arose because of the advancement of the printing press.

Rejected as effeminate by the masculine world of business, trade, and politics—and facing extinction—liberal ministers recognized they could build a platform of influence among literary-minded, middle-class women and urban intellectual elites by writing for leftward newspapers, inhabiting academia, and publishing sentimental books.

And write they did.

Aimed at middle- and upper-class women, their content was, Douglas says, highly sentimental, emotionally driven, and politically liberal. They knew they had to retain at least a homage to Calvinism to get Americans to swallow the pill, so they softened it for the sake of widespread palatability. Call it Calvinism Zero.

Rather than dealing with the masculine world of business, politics, or theology—a world from which they had been banished—their writings focused on social causes: women’s rights, alcohol abuse, slavery, children, etc. Rather than creating a new market with their content, Douglas notes, ministers were instead tailoring their message to already existing female interests and appetites.

Likewise, two fundamental assumptions among liberal clergy (and the women they addressed) were that, first, women are morally pure and more naturally disposed to religion than men; second, that men were worldly for being business-oriented and culture-facing, ruined women and children through alcohol abuse, and must become more like women (receptive, passive) if religion were to benefit them.

One of the most prominent early publishers, the New York-based Harper’s, realized the key to success was writing to women even when a book or magazine was supposedly for men. Their theory—and a successful one at that—was that women would buy the books and tell the men what to read.

Facing a crisis of rejection and a banishment from the sphere of masculinity into a cultural Siberia, ministers sought influence through mass media and among women. Rather than losing a seat at the table, effeminate ministers sought cultural relevance by appealing to the liberal, intellectual elites and their social causes, among whom they largely found acceptance.

It’s worth noting that as a consequence of the rejection they faced (and still face) at the hands of masculine working men, ministers have long despised them—and vice versa. This is one of the main reasons masculinity has drastically declined in the church, and why so much of the prominent media-related resources produced by influential church leaders, from books to blogs, are robustly effeminate and left-leaning.

That trend spilled over into the 20th century, Douglas writes, and was one of the most dominant reasons feminism swept through America like wildfire. If you want to blame anyone for the way feminism and quasi-marxist socialism has taken hold, you might just start with the pulpit.

The rise of the soft Reformed evangelical left

The church today is comprised by a majority of women, a trend that is hardly new. Women consume the lion’s share of Christian media, from Christianity Today to The Gospel Coalition—which explains why so much of the messaging is highly emotional, focused on social causes, and antithetical to robust masculinity. [Paul Maxwell, in this November 2018 video, outlines the modern history of the problem in Christian media well: —Ed]

As Leon Podles argues in The Church Impotent, it’s been a centuries-long slide into effeminacy for the Western church. The pulpit is filled, largely, with soft, effeminate pastors and, as a result, the men stay away. Our publishing arms reflect this.

The trend that stands out in more recent history, however, is that groups once thought of as bastions of Reformed Calvinism have come out of the velvety-soft effeminate closet (PCA, SBC, SBTS). Or as Doug Wilson has called them, The Soft Reformed Evangelical Left. Closet egalitarians masquerading in the halfway house of complementarianism. Calvinists with a sword hewn in the social justice quarries. Critical Race Theory Calvinists. Same-Sex Attracted Reformers.

The SBC’s President, J.D. Greear, soft-peddled on homosexuality. Moore and Chandler chastised evangelical Trump supporters. The SBC embraced Critical Race Theory, while the PCA went Downy soft on Revoice. On and on it goes.

The real issue is that ministers today face the same dilemma as pastors in the mid-1800s: How do you maintain prominence in the culture when you’ve been disallowed from the masculine spheres of politics and business (and, frankly, didn’t want to be in a man’s world anyway)? How do you, as a soft, non-fat-soy-sipping effete, maintain influence in America when your audience is emphatically not masculine?

The answer, for many, is the same as it’s been since 1820: You play to the women, you keep it real emotionalistic, you arrange your music in the key of Chris Tomlin, you sentimentalize and neuter doctrine to support leftist social causes, and you take to mass media to build a platform of influence among the super-sophisticated, Obama-loving world of intellectual elitism.

You build networks like TGC and T4G and Christianity Today, and you craft a message that feminist, liberal-minded elites want to hear. If you’re really smart, like Russ Moore, you take money from conservatives and use those dollars to promote liberal social causes like diversity, women’s issues, and Beth Moore in the pulpit. You rub it in their faces.

Because at the end of the day, there’s an animosity—unspoken, seething, subversive but sometimes more out—that the soft left evangelical leaders feel toward masculinity and men. Once and forever rejected by working men, the effeminate Third Sex is all-too-happy to join the rank and file of intellectual elitism—media, academia, upper-class professions—and get revenge.

Now, as ever, the pulpit needs hard men. Elder boards need hard men. The SBC needs the hard men to stand up and speak out (and stop funding the nonsense). We need more Christian publishing and media outlets like Founders.org, that champion rather than castrate masculine virtues.

Denominations need to clean house and retake their seminaries (although SBTS looks pretty dire after Mohler just fired several professors who opposed leftist teachings…which leads me to believe the change will come from the bottom up, not the other way around).

The other thing we’ve got to do, as Doug Wilson has said in Mother Kirk, is realize just what kind of predicament we’re in, and start to formulate a strategy. We may have Y chromosomes in the pulpit, but they’ve been wearing skirts for a long time now. We’ve been so long without authentic masculinity in the pulpit that we’d scarcely know what it was if we saw it. As Wilson says, the push for women preachers is a result of the air we breathe:

The men in our pulpits for many years have been simply jury-rigged women; when the request comes to bring in the real thing, on what principle will the request be denied? We cannot say that we must have masculinity in the pulpit because we do not have that now.